Fig.4. Looped movement of the inter-connected symbols A and B across Unity Screen (outlined with thick lines).

The number of cells produced by each division is:

Suppose the number of times Unity Screen is divided = N, then,


As each cell can be used to store binary data by assigning a pixel as 1 and a void as 0, thus,


It should be noted that the cells in the PM are operating switches. In the PM:

​
As Unity Screen (see Figure.1) defines the limited scope of perception of Source Mind, the two separate symbols A and B can no longer be perceived at the same time. Thus the two symbols are to emerge in Unity Screen in temporal sequence one after the other.

The alternating appearance of symbols A and B (Figure. 3) can be imagined to be brought about by a looped movement of the inter-connected symbols A and B from right to left as illustrated in Figure 4. 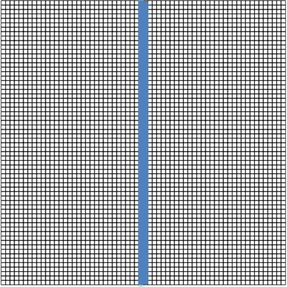 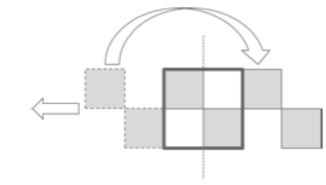 From this point of view when the inter-connected symbols A and B move across Unity Screen, each cell within Unity Screen switches from one state (pixel or void) to the opposite state.

Thus a clock is perceived from the perspective of Unity Screen with its 4 cells alternating between the two opposite states.

The passage of the inter-connected symbols A and B creates temporality. Temporality is measured using Unit.

1 Unit = the width of Unity Screen

Present Moment (PM) is defined as the temporal duration for 1 switching cycle to complete.

At the duality tier,

Change, movement, switch and clock are thus derived at the duality tier and perceived by Source Mind.

The nature of existence at duality tier can be described as: changing, moving, dynamic, and rhythmic.

This sequence of division and resulting duration of PM can be described as:

Suppose the number of times Unity Screen is divided = N, then,

PM is represented by the shaded cells in the centre of Figure 5 where Unity Screen is divided 6 times.

The availability of a sufficient number of switches and memory derived from the grid in Figure 5 (named MS Grid) enables the creation of the metacomputation system (MS) that consists of the following three faculties:

The metacomputation system (MS) is a moving grid of cells of pixel/void passing a fixed window of PM. MS contains data, program and processor. Computation occurs at PM.

The MS is created, sustained and powered by Source Mind.